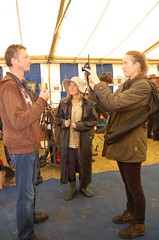 In amongst all the other goings-on at this year’s Somerset Scythe Festival was a woman searching out extras for a scene in the new Anna Karenina film starring Jude Law and Keira Knightley. By all accounts there’s a scene featuring the grass being cut by scythe and the production team are looking for people who can mow to take part when it’s filmed later in the year.
Of course this is too good an opportunity to miss so we all queued up to be photographed and give our names and contact details.  Some were more keen than others, particularly my friend John Letts who, in his efforts to meet 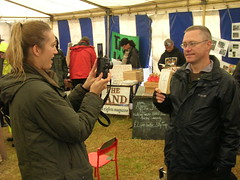 Ms Knightley offered, amongst other things, to grow a beard for the part, his services as ‘ancient crops consultant’ and access to his own fields of ancient wheat for filming!
Stardom awaits, keep watching this space (and possibly ‘Hello’ magazine) for the gossip!