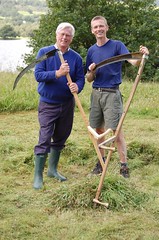 This week I got a call asking if I would teach John Craven to scythe for an episode of the BBC’s Countryfile programme. They were filming at Brantwood House and focussing on John Ruskin’s work in training and education. My recent “Learn to Mow with an Austrian Scythe” course tied in the training aspect with the gardens and also gave an excuse to get John to try out something new for the viewers.
As backdrop for the filming I invited the NW Scythe Group, who the tv crew affectionately named the “Scythe Mafia” (does that make me the Scythe Godfather?), to come along and mow with us for their chance to grab a bit of prime-time telly. 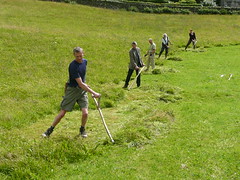 Happily, the tv crew brought some southern weather with them and we had the first hot summer day for several weeks. The grass was getting on a bit but still had a last flush of flowers and cut sweetly for camera. Hopefully this will show the mowing as the efficient and pleasant work I promote and teach.
So how about the actual lesson? I’d had a lot of discussion with the production staff prior to the day about safety (“Will he cut his feet off?”) but once I’d convinced them of the scythe’s safety and that I’m qualified to teach how to scythe they were happy for John Craven to have a go. I brought a newly peened 65cm profisense scythe for him and we set this up together off-camera. I suggested we then spend 10 minutes going through the mowing technique together so he could get a feel for it. John decided that wasn’t necessary and he would have a go ‘in real time’ for the rolling camera. Tune in to BBC1 on August 19th to find out how he did…