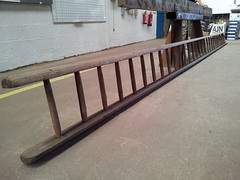 This month I was invited by the Heritage Crafts Association to take part in their efforts to preserve the craft of making wooden ladders. I travelled down to Northampton with fellow greenwood worker and HCA chair Robin Wood to learn to the craft of making ladders from Stanley Clark who made ladders until the trade ceased in the 1960s.
Stanley worked for J Ward & sons at a time when 12 people were employed making 1600 wooden ladders per year by hand and joined when the norway spruce poles were still being sawn in half using a pit saw. He saw the methods change over the years and mechanisation appear but when aluminium appeared the business folded, almost overnight.
Our spruce was a long way from the ideal timber which Stanley worked with so truing up the sides and planing the two halves to smooth tapered poles took Robin and I five hours of work while Stan informed us that he could make four ladders a day from scratch on his own. Five hours of manual work could sound terrible but the atmosphere was brilliant, with banter and stories so even though our muscles ached we were loving every minute of it. The workshop was full of the smell of spruce and fresh shavings were piling up on the floor, giving an idea of how it must have been in Stan’s day. 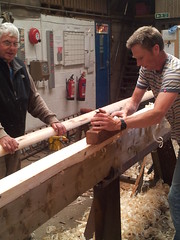 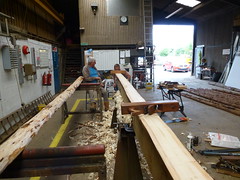 We were building a thatching ladder, a bespoke item with the rungs spacing fitted to the owners leg measurement so that, when kneeling on the ladder, the rungs always fall comfortably under the kneecap. The ladder is made with the curved faces of the poles to the inside for additional comfort but also to give a straight edge to work to when laying the thatch. The rung spacings were carefully marked out, drilled and then the holes reamed with a brace and bit to fit the tapered ends of the dry ash rungs, more hard work but we got better with 42 holes for practise. 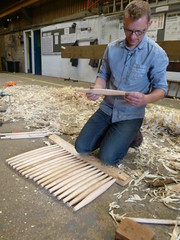 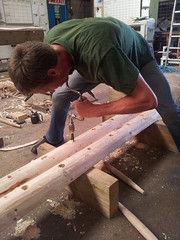 The rungs were fitted to one side and then the second knocked into place with a lump hammer; we need to practise to get them all perfectly aligned but the straight grain ash flexes to take up any inaccuracies. 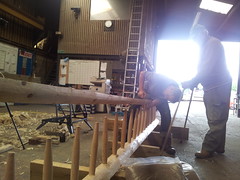 There was yet more planing so smooth the sides and Stanley, who has been seriously ill, couldn’t stop himself from showing us how to plane the chamfered edges. Wooden pegs were cleft and fitted to pin the ladder together before steel tie rods were added below every fifth rung to finally secure it all. 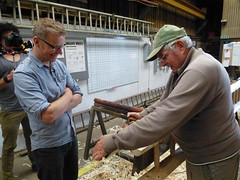 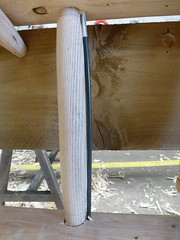 In some ways a ladder can be seen as a simple thing but we learned a huge amount, lots of small details which you only get from working with a real time-served craftsman. This was the first ladder which Stanley had been involved in making since Ward & sons closed 50 years ago. We all felt very honoured to be making it with him and it was quite an emotional experience when we carried our 15ft thatching ladder out into the sun and climbed up it. It was fantastically stable and solid, something I’d feel very secure working off. 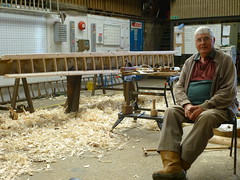 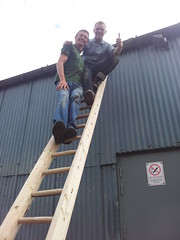 The HCA will be releasing the film which was made during the two-day workshop and a free training course is being organised for craftspeople wishing to learn to make ladders, either for themselves or as part of their business. An online learning resource will also be available to help you make your own ladder and keep this craft alive into the future. I’ll be posting links to all these as they become available.