Posted on September 2, 2015 by stevetomlin

In a couple of weeks I’ll be at the Beamish Show of Agriculture, making and selling wooden hay rakes. Here’s a lovely video on the making of wooden hay rakes, from the Sam Hanna Collection, look out for the oak swill basket being used to hold the tines.

Filmed in 1966 the film is for me as much about the shift to mechanisation as about hay rake making.  The commentator explains that “as a hand craft, rake making belongs to the past” and “the machine takes out the laborious task of using hand tools.” I’m sure they did make a lot more rakes per day but it’s surely ironic that “hay rake making as a hand craft was killed by mechanisation and revived by the use of mechanised tools.” I wonder how many other men were put out of an income and how the few now running that machinery felt in the day to day work. It’s summed up in another classic line:

“..the hand brace and bit has been substituted by a boring machine.” 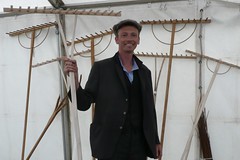 “You come away from the great factory saddened, as if the chief end of man were to make pails; but, in the case of the country man who makes a few by hand, rainy days, the relative importance of human life and of pails is preserved.”