I’ve been going to the Somerset Scythe Festival since it started in 2005 and, in those 6 years, we’ve had sunshine for every event bar the odd short shower. So maybe we were due some rain and this year we got it; the heavens opened and the wind blew cold. Nevermind, the show goes on and a scythe will work just as well in the rain as the dry. I arrived with Christiane on Wednesday night as she was teaching on the ‘teachers’ course’ and we both led workshops on Saturday. Like many people who’d set off from home when the weather was 23 degrees we were stuck with insufficient clothing but we were soon out in the wet with other regulars and some newcomers for the days competitions. 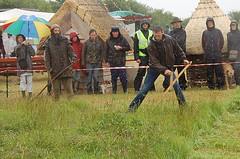 I was dragged in to a last-minute ‘rest of the world’ raggle-taggle of mowers for the team-mowing event. Fortunately this is one of the less serious races and we came in last with the East of England taking first place. This was followed by ‘blind mowing’, another new event and one with dubious justification. Four mowers bravely allowed a random selection of rags to be tied over their eyes and then attempted to mow a 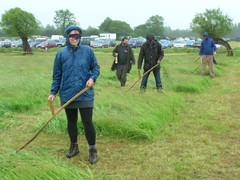 small area. The actual mowing isn’t a problem as the scythe blade stays in contact with the ground, it’s walking in a straight line and finding all the grass that is the challenge. Simon Damant was first to finish while our own Paul Kingsnorth was allowed to bow out gracefully after losing track of his meadow in the increasing fog of well-intentioned but often conflicting directions being shouted at him.
The main event of the day is the individual race in which mowers compete to cut a 5x5m patch as quickly and cleanly as possible. Normally this is preceded by the qualifying heats with those mowers cutting the longest distance during 1 minute making it through to the finals. In recognition of the weather, this year those in last year’s final were automatically given a place along with any newcomers who felt confident and were willing to get soaked to prove it.
I’m not really interested in competing myself; I aim to mow and teach people that using a scythe is a relaxing, stress-free alternative to other grass management tools which is more collaborative than competitive. None the less I have to admit that I enjoy the championship each year; it’s a great place to see how much we’ve all improved over the years, to observe and consider people’s techniques and to drink a beer, cheer and discuss ‘form’ at the only sporting event I’ve any interest in. 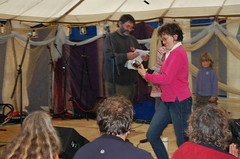 In recent years the number of women has been steadily increasing and with it the quality of that competition. I’ve heard that within their small group the rivalry is friendly but intense with no quarter given. This year Andi Rickard was quickest with 5min20 and also picked up the Women’s Quality Cup in the process. 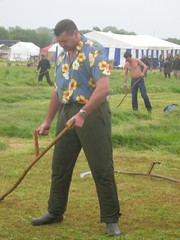 In the men’s section, the talk is of who will topple Simon Damant who has been champion for the last 3 years. All eyes were on 7’6” George Montague, who’s scythe blade was snapped clean in half last year under his raw power. But it was his stablemate Andy Coleman who had the combination of strength and technique with the grass literally flying off his blade to finish in 1min54, the same time as George but with 8 marks for quality as compared to 4.
In the end though even Andy couldn’t match up to Simon Damant who once again lifted the cup with an impressive result of 1min37 and quality score of 7. This is certainly not 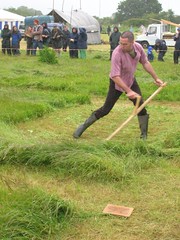 his quickest time but the rain produced a remarkably heavy sward which slowed all the competitors and left even the best out of breath.
Along with speed there must be quality and for some it is the Quality Cup which is the most coveted prize, awarded to the mower making the neatest cut. Phil Batten of Wales took this for the second time with an unprecedented perfect 10. 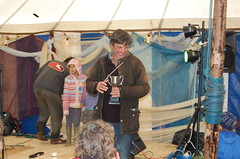 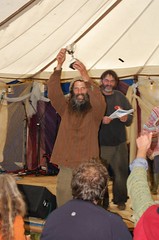 Mike Ingram was awarded the medal in the English Scythe category, Henry Best won the over-80’s class and best newcomers were Beth Tilston of Brighton and Andy Marcewski who I mowed with, in much more relaxed conditions, at the Bodger’s Ball. 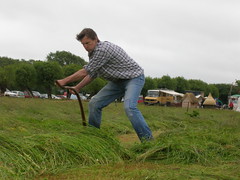 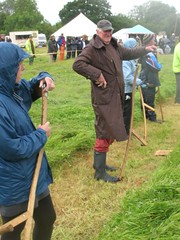 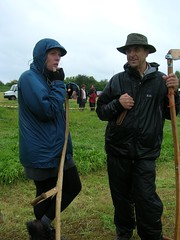