During the summer, Christiane Lechner and I set off for the far east of Romania to attend the International Haymaking festival at Gyimes in the White Carpathain mountains of Transylvania. During the week we learned a huge amount about haymaking, building haystacks and the local culture but for me the highlight of the week wasn’t even on the programme. 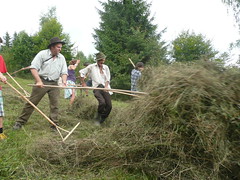 We’d been working hard all morning turning and raking down the hay and stacking it into pikes. It was a difficult morning, the heat was oppressive for us Brits and we struggled to understand Attila’s instructions on how he wanted us to be working. Once we’d finished, we returned to the courtyard tired and dirty. We ate an excellent meal prepared as always by Attila’s mother and girlfriend then settled down to relax for the rest of the day. Not half an hour later, Attila appeared and told us that he’d spotted his neighbours still working in the next field. There was no obligation, but he was going over to help and, if we wanted, we could join him to help them gather in their harvest before the coming thunder storm. 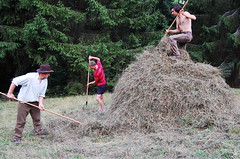 Off we went, half running up the lane with rakes and forks in hand while Attila shouted back that it was just like we’d been doing all morning, to work the same way. In the field we found the farmer with his son and daughter working to stack up a single pike while hay lay on the ground covering almost an half an acre of steep hillside. We set to work and suddenly everything fell into place and the confusions and irritations of the morning fell away, leaving an efficient haymaking team in its place. I could certainly feel the adrenalin running through me as we raced to beat the weather while lightning crashed around us. Everyone found unknown reserves of energy which at times came out as whoops of joy which were echoed back by others.
We finished just as the rain started, shook hands with the farmer and headed back to the shelter of the courtyard barn, still fizzing with excitement and telling stories of the adventure. Attila’s father brought out his fiddle, Tom picked up his accordion and five minutes later the neighbours arrived with a crate of beer to thank us for our help. Attila said they’d resigned themselves to only saving a small part of the hay and were amazed to see us arrive and how well ‘the English’ could work’! Attila himself was rightly proud and it helped give credibility to his project.
With music and beer we passed the rest of the afternoon drinking, talking and learning traditional dances from the local boys, flushed with the feeling of tired satisfaction. 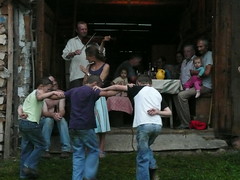 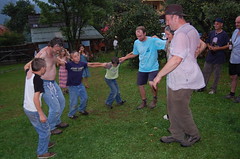 0 Responses to Hay rescue in Transylvania