This week I met with Ian & Edward to discuss our currach building project. I’ve been thinking about another boat project since I finished the recovery kayak and I was attracted to the curach as another lightweight skin-on-frame boat.
The curach is a traditional skin-on-frame boat from western Ireland similar in construction to a coracle. It has a solid set of gunwales built from sawn timber with the hull made of bent hazel rods which are fitted into holes in the gunwales and lashed together. A canvas covering is stretched over the frame and waterproofed with coal tar to make a seaworthy fishing craft. 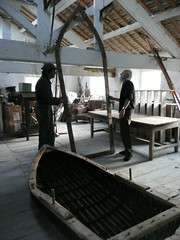 First we went into the bottom of the mill and brought out a Dunfanaghy curach built in the 50’s by Jack Robinson. Edward got his first curach at age 14 and told us the story of when his father took him to Mr Robinson’s workshop to buy a curach. “How much will it cost?” asked the rather straight-talking Mr Acland. Mr Robinson explained that the currach was “priced at one pound per foot. This one’s 7ft 6in, so that’ll be seven and a half pound.” “I’ll give you eight” came the reply.
With the curach out in the daylight we looked over the size and construction, marvelling at how such a simple and primitive craft was capable of going to sea and had lasted all these years. After discussing options we decided for our first project to build a two man craft 10ft long with a single rower but capable of carrying two people, using a set of gunwales Edward  has as a pattern. I took measurements of the timber required and after a hearty dinner of soup, we set off to the woods. 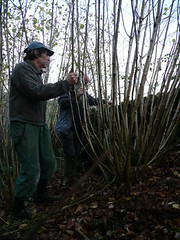 The gunwales for our curach will be sawn from local spruce and the body of the boat made from hazel cut from Edward and Romola’s coppice wood. They’ve been managing the 2 acre site for 24 years, restoring it from a neglected and overstood coppice into a beautiful, productive woodland almost entirely by hand. We’ll be learning as we go along exactly what the ideal material looks like but there was no doubt that the woods were full of suitable rods, enough for a great flotilla of currachs.
The first stage is to research materials and order up the timber so we can start making the gunwales. Our primary aim is to have the curach ready for a big coppice association exhibition next spring at Farfield Mill, Sedbergh but ultimately to produce them as a sustainable craft for the Lake District and beyond.