Sunday was a gorgeous blue-skied day and perfect weather to take the curach out for it’s public launch at Bowness in the Lake District. Edward was already there when Ian, Susan and I arrived and we carried the curach down to the shore to wait for our small group of invited guests. With hardly a breath of wind the sailing crowd were keeping themselves busy with polishing and cleaning and the only boats on Windermere were other rowing boats and a few small motor boats. 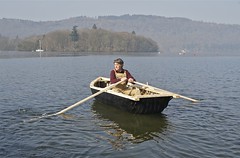 We’d elected Edward to make the maiden voyage. He’s the most experienced curach-man among us, it will be his boat and I think he was the most excited to be finally getting on the water. He didn’t argue and, once the friends were gathered and cameras poised, he stepped nimbly in and was given a friendly push out onto the lake. We were fortunate to have Florence Acland to take these professional photos for us to capture the occasion.
What a glorious moment; the curach slid smoothly out, barely touching the water and Edward gave us a demonstration of quick and nimble the boat is by turning and spinning it almost on itself. I was surprised how much power the narrow oars provided and they were more than enough for the lightweight craft. 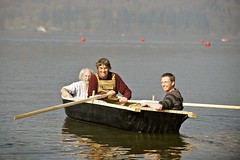 Of course we couldn’t get away from the ‘Three Men in a Boat’ tag so we called Edward back to let Ian and I join him for a photocall. On top of his reluctance to  stop playing, Edward was somewhat dubious about this venture; the curach is only 10ft long and not really designed to carry three men but we assured him it would be fine. We climbed carefully in and sat ourselves fore and aft as comfortably as possible on the hazel ribs. 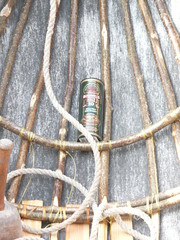 I’m no sailor and much happier with my feet on dry land but there’s a special thrill in building a boat yourself and getting out on the water in it. The curach is wonderfully stable and even with all of us in barely drew any draft. Sitting low in the boat with just a sheet of canvas between me and the water gave a wonderful  feeling of closeness to the lake. Ian had had the forethought to bring a bottle of holy water (from the Bushmills distillery) which we used to toast our success.
The morning continued with people taking turns out on the water either as skipper or passenger. Edward’s daughter Florence announced she wants one for her birthday while Ian and I made plans for a 16ft model complete with sail and we all felt very proud of such a simple yet sophisticated craft.
As part of the day the curach was officially named: Chough II. This is part in tribute to Edward’s original curach Chough and partly for the Irish Chough (Pyrrhocorax pyrrhocorax), a glossy black bird with long curved red bill, red legs, and a loud, ringing call. Also known as ‘sea-crow’, it is a buoyant and acrobatic bird which is under threat and makes a fitting emblem for the curach.
Today we took the curach to Farfield Mill, Sedbergh where it will be on display for the whole of April as part of the Coppice Association’s ‘Story of Coppice‘ exhibition. If you’re in the area, call in and have a look at her and all the other wonderful craft on display. 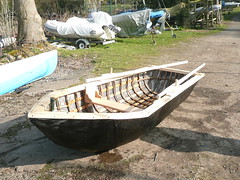 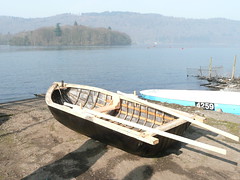