A flurry of posts this week which is unusual. There’s often lots going on but I don’t always get around to posting about them.
Anyway, today I got a stage further with my project to start properly using my two man crosscut saws with the arrival of a jointer/ raker guage which I bought online from America. This one is a ‘short’ jointer made by Atkins & Co of Indianapolis. It’s marked as being patented ‘May 5 74’ which, the more I think about it, could be 1874? Well, aside from a bit of surface rust, it’s in great condition and I’m pleased to see there is still a thin shim of paper under the raker guage plate where the previous user set it up for his saw. 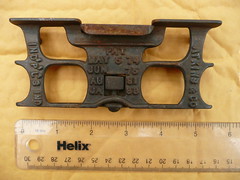 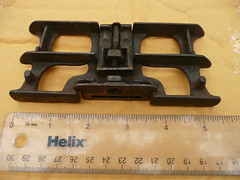 For sharpening, a flat file is clamped into the tool and bent to match the arc of the saw teeth using the screw thread. The file is then run over the teeth to file them all to the same length before they’re sharpened. The raker guage sets the distance below this arc of the raker teeth which clear the sawdust from the saw cut. I’m looking forward to trying it out.
There’s a lot of interest in two man saws here in the north-west of England and I’m planning to organise a day this year for people to get together and learn about their use, sharpening and maintenance. If you’re interested in taking part, send me an email steve-tomlin[@]hotmail.co.uk