Monday was a Big Saw Day in Dalbeattie. As in, an important day about saws and a day of big saws when I joined Gavin Phillips in his workshop to learn about pit sawing from Barbara Czoch and Kevin de Silva of the Carpenter’s Fellowship.
I’ve been interested in two-man crosscuts for a while and buying a few here and there as an alternative to bow saws and chainsaws then Gavin announced he’d bought a brand-new pit saw and was looking for someone to show him how to use it. I found this blog showing Barbara’s expertise in pitsawing as part of a synagogue reconstruction in Poland so Gavin invited her and Kevin up to show us the ropes.
The first thing is laying out the log, choosing it’s best alignment and then snapping ink lines to mark out where the boards will be sawn out. Gavin is keen to do some sawing as part of a demonstration/ hands-on activity for the public at shows so we were looking for a setup that could be safely done on a show field and Barbara suggested using an A-frame for which the cleaving brake would do to start with. 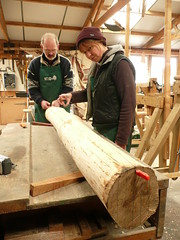 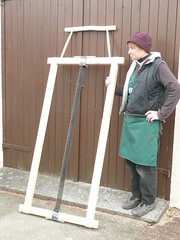 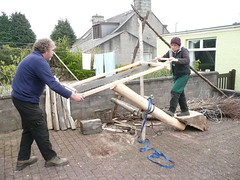 Barbara had brought a frame saw with her which she’d built from regular softwood and a section of discarded bandsaw blade. Okay, got the log marked out, got a saw – time to do some sawing. Barbara and Kevin had first go, then Kevin and Gavin, then Barbara and Gavin, then they agreed it didn’t work; the teeth were spaced too far apart, only 7 per foot and it was too hard to pull that through the timber. Bummer.
Actually, this is where we were really lucky; if the saw had worked we have happily sawn out a few boards, played around with different setups and patted ourselves on the back. Since it didn’t work we had to switch to plan b and, make our own saw! A few hour’s work with an angle grinder and files gave us a set of shiny new teeth at 15 teeth per foot with a less aggressive shape to suit human powered sawing. We jointed the teeth and used Gavin’s huge saw-set to bend the teeth and form a kerf. While Barbara and I worked on that, Gavin and Kevin fettled up a vintage pitsaw which Kevin had recently picked up on ebay and we also made and tried out a setting anvil as an alternative to the saw-set – I love these kind of busy days when there’s lots of innovation and experiment with a group of people who can all get on and do things, bouncing ideas off each other. 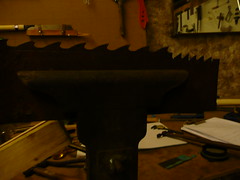 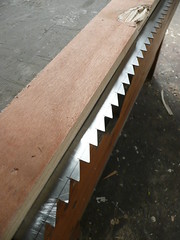 The pit saw was ready first and we moved indoors to set up the log on a scaffold. I was at the other end of the workshop when they started but the sound of the saw at work quickly brought me over; it’s a beautiful sound and really distinctive from crosscut sawing. Barbara had bagged herself ‘top dog’ position and while her cut was running true along the ink line, Kevin was having trouble keeping the saw straight at the bottom. The saw was covered in some unidentifiable gunk which might have been affecting the set and it was time to eat so we put the saw to one side and went inside to replenish our energy with Clare’s wonderful cooking – suddenly we were all starving. 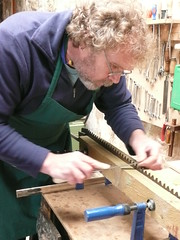 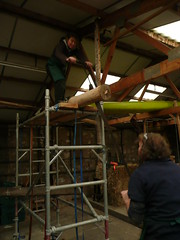 Back out to the shed and time for the new frame saw, had we really made a saw and would it work? YES! oh yes it worked, singing it’s way through the wood almost as shiny and bright as the smile on Barbara’s face. The shavings weren’t quite as long as from the pit saw, the exit line was more ragged and again we had trouble holding the line on the underside but without doubt the saw worked with our hand-cut teeth which was a revelation for me, to make a saw so quickly.  The next step is to learn more about teeth shapes and get some more bandsaw to make an improved version. At 10:30pm we finally called it a night and went in to toast our big saw adventure with a big glass of wine.